Understanding Neighborhood Country in the Region through their Literatures

Literature is the record and reflection of human society of the past with realistic evidence since writers and poets are those who hold their pen jotting down their master pieces as testimony of reality so we know social progress or decline by literature.
The ascetical of literature writing with historical matter has been passed down through time containing abundance knowledge of real life phenomenon in each society specifically happening in each stage in development progress. Literature plays important role in the way that readers understand daily life matters including Custom and tradition, Geography, History etc,. For instance, if we reading Tum Teav love story, we might im a picture of Khmer people’s livelihood during Longvek period, while Phum Derechhan (Villages’ Beast/ภูมิดิรัจฉาน) tells readers how Khmer People, especially those in Krang Leav Village, lived during under oppression of French Colonization. The New Sun on the Old Land is a contemporary realistic novel which reflects actual events in contexts of Cambodian society during hay day. Post-Colonial Government set Political program for national election aligned with democratic principle and governance. This novel skillfully reflects the society where politician seek support by making promises only to end up with breaking it and oppresses the poor supporters later on. Furthermore, in each period, there were many different poets describing natural beauty introducing readers to love of nature so deeply that they are willing to protect their environment. Besides, there are also poets about natural law, social ethic and morality, and wisdom advice as well.
Comparing to neighboring countries, their literature masterpieces consist of similar matters such as romances, writing style, historical events, and historical folklore. They have similar character’s names, plot, and set of time and place of the story which are mostly influenced by writers’ social environment. For examples, the literature of regional countries reflects actual events in their own nation as in Khun Chhang Khun Phen which is one of Thai masterpieces also available in Cambodian version.  Besides, Southeast Asian Regional literatures masterpiece such as Tum Teav (Cambodian), Khun Chhang Khun Phen (Thai), and Thav Luor Neang Uor (Lao) are specifically romances with consist of love, jealousy, social status stereotype, and always socio-economic environment in that period. According to literature studies, these stories were made by writers and people narrators telling about eternal love as in English romance, Romeo and Juliet.
In this essay, we do not aim to cover all stories in detail. We only observe that beside each stories mentioned, we also focus on social context. The three literatures above are not yet considered symbolic literature of each country at any perspective but those classic fictions tell us each countries overview and overall tradition. To what extent can we learn about each regional country’s custom and tradition through their literature?
Understand neighborhood country in the region trough literature

1.      Classic literature
Classic literature is important in reflecting society and transition from one regime to another especially when the society transform completely. Some writing did not mention exact writer because those who live in certain period are being oppressed and divided by social class. In Southeast Asian literature is influenced by religion where countries with similar religion possess similar literature with only different character and story setting.
Religion and social classes are essential to determine context of literature.  By observing closely we can identify similarly between Classic tales of XinXai (ซินไซ) of Laos and Sang Selchey in Cambodia. They have similar story plot, peak and solution while names of characters are almost the same. In addition, Maranak Mata (มรณมารดา) in Cambodia is not far different from Pla Buthong (ปลาบู่ทอง) of Thai except that Cambodian version has more detail description. For another example of comparison, Khun Chhang Khun Phen in Thai and Khmer version has much similarity regarding to story beginning and name of characters.
As mentioned above, those classic literature are crucial in explicit the society, economy development, cultural tradition of each national more or less according to their story ploy and setting.

2.       Contemporary Literatures
Contemporary literature does not only reflect social context of the writers but also mentioned the external influences. Various Thai educational institutions also mentioned study of Khmer modern literatures to understand about Cambodian social context and history. Therefore, they are able to identify management and leadership in each period such as in Phkar Sropon and Mala Doung Chet by Mr. Nou Hach.
Phkar Sropon[1] story which was set in 1933 showed Cambodian society of agriculture and small trading. The education system is in French design following French style where high level student need to study in the city while the poor remained uneducated. Girls are controlled strictly by their parent. Most people appreciated and give value intelligent and education; however, influence from the materialism such as wealth and fame are more attractive to them. Beside materialism, the story also mentioned traditional values as people followed strictly to the rule when they create family, prepare funeral, believe in spirit and superstition.
In Mealea Doung chiet[2] by Mr. Nou Hach, the writer try to compensate readers by what he corrected what he did in Previous novel, Phkar Srapon in which both character died. In his new novel, the writer brings up women’s right to equal to Men in nationalism. Such great masterpiece describes life of student who working hard for education while having fond of music, art and tradition of Thai.  Influenced by Thai culture, the protagonist also speaks Thai at some point of storyline allowing him as Khmer student and Thai woman create perfect romantic dialogue as fuel for the story plot moving on and on. Beside romance, the writers also mention corrupted administration and weak management at that time. He writes about a former Thai civil servant who moves to Cambodia because being scape goat in his country, Thai during war in Indochina. Passionate interracial love connected two loving souls from different countries by understanding each other and values the morality in humanity. They go beyond nationalism and social status to become true love sharing the same destiny.
Death In Aranh[3] (มรณภาพที่อารัญ) is a modern literature about female victim worker in Thailand. There are several researchers critic this story; however, this novel tells us a lot about life of immigrants, human right violation of immigrants from their Thai boss that might lead to death. Contrary to above novel, other young writers started to write a story about work immigrant who is treated nicely in Thailand, jealousy of rich man against house workers, strict rule by Thai Polices, and deportation of illegal immigrants. Modern literature, The Destiny of Flower outside the garden[4], (นิศัยดอกไม้นอกสวน) does not only show Khmer society and Khmer immigration to Thailand but also protagonist modesty by travel to married Khmer girl at her homeland and build their family following​ cultures as well.

Folk tales is important in showing its country origin’s Social classes, ideology, belief, tradition and custom of each nation’s origin. However, in Southeast Asia, folk tales are much similar as the example of Thun Chey (ศรีธนญชัย) in Cambodia origin. Comparing to other folk tales originated in region, there are similar story which contain similar story backbone, wisdom, characters. However, there are also some differences according to geography, livelihood, history, tradition and belief.
Thun Chey is widely known across the country and also has seen in neighboring countries. The plot for Thun Chey in Cambodia, Thai, Laos, are very similar in lengths and contents. Thun Chey in Burma has similar story lines while story in Singapore, Indonesia, Malaysia, and Philippine are somehow similar to Thai Version. The character of protagonist is somehow indifferent where he is considered to be a Trickster.

How the story Thun Chey is varied among each country in the region?

Story setting and story line:
The Story setting is similar, simply about life of a young man till the end of the story except in Burma version there are three wise men. Story start from peaceful environment and then the problems arise making the readers willing to follow until everything is solved smartly.
Story line in Khmer version is similar to Thai, Lao, Vietnam while Story line in Burma, Indonesia, Malaysia, Singapore, and Philippine has similar event but with different motif which is different from Thai and Khmer version.

Literature play important roles not only just worked of art but also to attract reader to follow and chilled with the storyline which writer shows by reflecting evidence off reality according to each social context. These crucial roles enable one nationality to understand another. As mentioned above, we can see that the impact of literature whether negative or positive is evaluated according to each culture, tradition, and belief in each nation.
However, This important role is not absolute or limited to writer talent because each masterpiece usually play its role to show social context, time and place setting, and certain characters including human, plants, or personalized objects. These are method to enable people to understand deeply about a certain society and create their identity in region through literature. 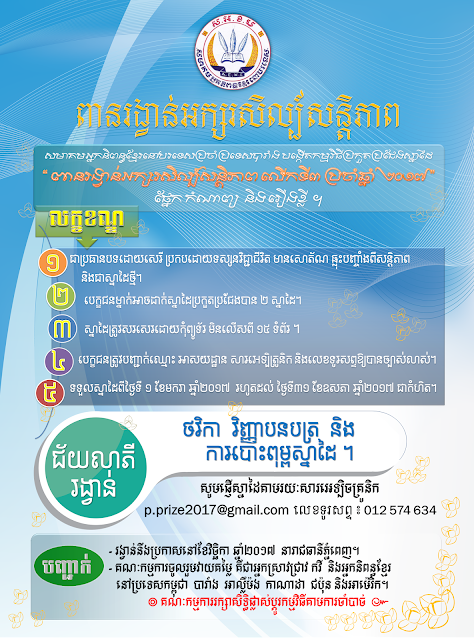 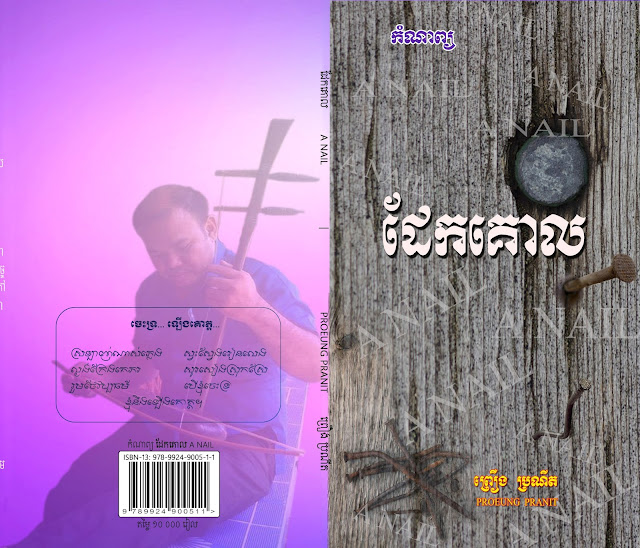 A word ‘NAIL’ reminded me of the time when I was 12 years old. My poor family moved to a new house but we still needed our used wooden wall. My father asked me to move used nails from our old wooden wall that we took from our previous house. As a lazy boy, I said to my father, “why do we need to pull the nails? Just burn them (old wooden wall) out and we will get the nails…. hammer them down… it’s faster. ” My father said, “we need to pull the nails so that we can use them again. If we keep the nails there, it will break carpenter plane when we smoothen the used wooden wall. Keep these nails nicely or you will step on them and get tetanus”. Once day my brother stepped on a nail and got his sloe hurt. It was very painful so he blamed the nails. My father said, “Don’t blame the nails, and blame the keeper.”
In 2007, I went to a market in Phnom Penh. I saw a beggar who doesn’t have a right leg.

He was wearing army uniform. He didn’t have walking stick so he moved with his hands together with his bottom. He came to me slowly. I was watching his movement until he was close to me. He said, “I was disable and be a beggar not because of me… it was the war.” It suddenly reminded me of the nails that were thrown away and the nails that were reused. While I was learning poetry, I have a strong heart toward poems. That’s the reason I am able to write this poem. This poem is a meaningful reflection to modern Khmer society, especially to the disable people as “his disability is the exchange to peace for this country.” The nail I mentioned in my poem refers to a piece of iron that has a clear goal but he was blamed on whatever duties he was given. 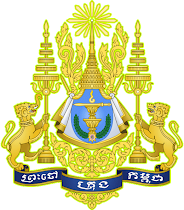